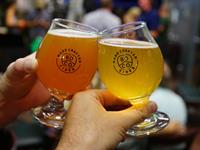 If you have been to the BOCO Cider (https://www.bococider.com/) taproom in North Boulder you more than likely came across the term keg conditioning.  Here's why it's so important to BOCO's "Made the Boulder Way" process of making old school hard cider: no added sulfites, unfiltered, unpasteurized, gluten-free and naturally carbonated.

Owner Mike Belochi explains that "instead of force carbonating with industrial CO2 tanks (like virtually all others) BOCO puts the remaining traces of yeast to work by adding a little bit of fresh juice to our kegs so that they make the bubbles naturally."   Proponents of this so-called “keg-conditioning” method have claimed it benefits the beverage by scavenging oxygen and making a different type of smooth carbonation.

BOCO doesn't add sulfites or use other techniques that kill off the fermentation yeast so some still remain to happily munch on the extra juice. This minor 2nd fermentation in the keg produces enough bubbles to carbonate the cider in a gentle silky way.  In the closed keg the natural carbon dioxide is trapped and stays in the cider.  The only other widely used application of this secondary fermentation is in méthode champenoise (Champagne method).

BOCO’s philosophy is that this secondary fermentation enhances the quality of its ciders in two ways.  The first being smaller and thus richer bubbles. Local journalist and craft beverage guru Doug Brown tasted BOCO’s ciders and found they had “an effervescence that somehow is velvety, rather than the parade of pinpricks that normally accompanies fizzy beverages.” (https://www.coloradodaily.com/2019/11/07/boco-cider-turns-apples-into-adult-beverages-the-boulder-way/)  The second way is by extra aromatic and flavor characteristics.  There is a balance achieved by allowing the same yeast that started the cider to finish the cider, and it shows

Keg conditioning is a challenge because it relies on Mother Nature; BOCO makes the yeast its partner rather than forcing things artificially.   “The BOCO process is as much art as science to hit our sweet spot,” says Joshua Smith, BOCO Cidermaker.
Contact:
Michael, Owner
(720) 938-7285